Training workshop for the public 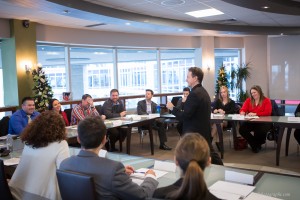 In the Jungle of Networking

“Deep inside yourself, you know that. It is not enough to run after lunches and the “5 to 7” ones, nor to talk nicely or to collect business cards in the view to move forward in the business world (or in life anyway!). A discipline is necessary to build lasting, friendly and win-win relationships. One should make every effort, dedicate all his time and make networking a lifestyle. Yes, efforts and a little courage should be put in the beginning, but the performance is guaranteed! How? […]
For some, networking is a way to earn and gain thanks to the new acquaintances, whereas for some others, it allows you to exchange mutual concerns with other businesspersons. The most pragmatic ones will say that networking is a chance to expand their own circle of contacts and to be socialized while bearing in mind the business objectives. The most timid ones, whose employers would like to see coming out of their shell, see in it a sort of obligation to put into practice different workshops and trainings on the subject. The most competitive ones participate in professional activities to get compared and discover challenges. The most seller-oriented ones use it to introduce their products and services. The most altruist ones go to that meeting to help others by seeing it as a way to help them and listen to their needs.”

From the “In the Jungle of Networking”, Réjean Gauthier, author.

In the Jungle of Networking public conference is firstly aiming to introduce networking in a different aspect. The concept is mainly based on practical measures which make you develop well-founded and enriching relations in a professional and personal frame.

Réjean Gauthier, the author, trainer and the speaker at the conference is also the designer of the RG Scale. A tool which allows evaluating the proximity degree that a person has with all the players that make up his/her network. It is exclusive – along with other “hints-smiles”, it will allow to all participants to develop a part of their relations until they become profitable.

The workshop-oriented training lasts of 150 minutes and consists of various interactions between the participants and the speaker at the conference. Apart from focusing in an inspiring group synergy, the application of transmitted notions will allow anyone to obtain tangible results right away from his/her next networking activity.

Part 1 How to be effectively introduced

Part 2 Proximity with others

Part 4 One to one discussion